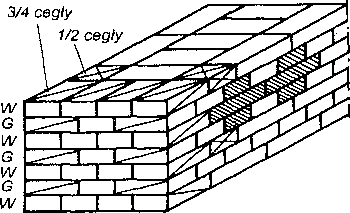 The figure shows the beginning of the wall in a cross-bond. A cross bond differs in this from the common bond, that every second} the spreader layer after the tens (from the side of the face of the wall) halves of bricks are laid. Thanks to this, the joints of the wall create a drawing of interlocking crosses. 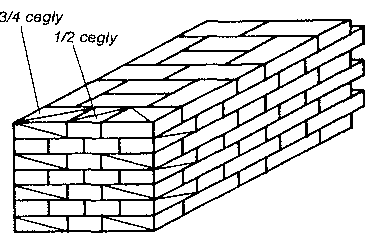 The masonry layers in the Polish bond do not differ from each other. Each layer is stretcher-head, and the vertical joints of one layer are offset from the other by 3/4 bricks. The walls in this binding are decorative. 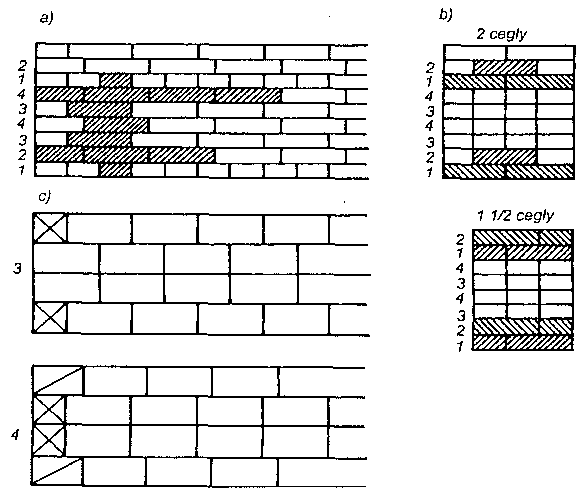 The multilayer bond presented in the figure shows significant deviations from the bonds discussed previously. Multilayer bonding is this, that only every fifth and sixth layer are bonded similarly to traditional bonding, while the four layers have vertical and longitudinal joints overlapping. There are four types of layers in this bond! Two layers - the first and the second - are alternately head and stretcher (depending on the thickness of the wall), the other two layers - the third and fourth only for stretchers. The order of stacking layers (Lynx. b) is as follows: 1, 2, 3, 4 layer and as layers 5 i 6 re layers 3 i 4. After arranging 6 layers, said layer sequence is repeated. Only in trolley layers, i.e.. 3 i 4, The bricks in the inner chords are these offsets in relation to the outer chords, to prevent the transverse joints from passing through the entire thickness of the masonry, because such a wall could be leaky. The bricks of the stretcher layers are tied only in the longitudinal direction 1/2 bricks.

Walls in multi-layer bonding have a lower load capacity than in traditional bonded ones, however, they are easy and much faster to make. Multi-layer bonds are particularly well suited to masonry in self-supporting and infill walls, e.g.. frame buildings.