Natural stone is most often used to make foundation walls as well as square and slab cladding on the internal and external faces of walls., made of well insulating materials, e.g.. from burnt bricks. Due to the origin and processing of the stone, we can distinguish between wild and field stones, cyclopean stone, roughly trimmed to the face, broken sandwich stone and mangled stone in blocks or slabs. Wild stones mean the so-called. field stones, that is, found in loose pieces and collected rather than broken from rocks. At most, large blocks must be broken into smaller ones, without surface treatment. 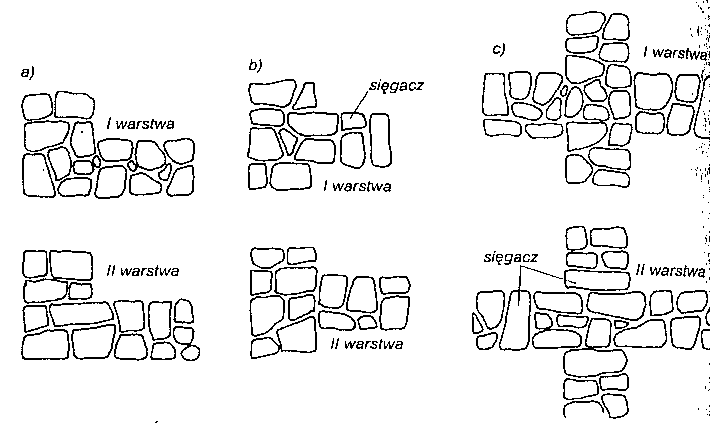 Binding stones: a) in the corners, b), c) intersecting walls.

However, only partially worked stones are more often used to build walls. They are usually walls made of broken stones, roughly hewn, that their contact surfaces are as flat as possible. The easiest way to do this is to use stones from sedimentary rocks with distinct layers, causing stones to loosen parallel to the direction of the layers. Recently, walls have not been made of wild stones due to difficulties in ensuring the proper bonding of the wall. This stone is better to use for concrete.

Stone masonry should be laid in layers, the height of the layer may fold 1, 2 or 3 stones. The individual layers are made this way, that larger stones are placed primarily in the corners and from the outside of the wall. The voids between larger stones are filled with smaller ones and mortar. Stones reaching into the wall should be used as much as possible, the so-called. reachers.

The bonding of stones at the penetration of walls and in the corners is shown in the figure. Stone is often combined with brick or to align layers, or for the construction of smoke or ventilation ducts, which is difficult to make from irregular stones. Structural elements in engineering structures, e.g.. bridge pillars, poles, is performed with a kami, processed very precisely to the form of a regular prism called a punch.
Stone can also partially be used as a wall material, when placed in the outer part of the wall, it simultaneously forms a durable and plastic cladding.
In order to achieve an architectural effect in the facade of a building, the rules of proper laying of stones in the wall are often deviated from, giving them the shape and position shown in fig. c. These are the so-called. cyclopean walls. The joints visible in the face of the wall, filled with cement mortar, create a mesh that gives the wall an aesthetic appearance. However, such walls are not suitable for carrying heavy loads.
Mortars can be used in the construction of walls: cement, cement–limestone, less often limestone. The choice of mortar depends on the type of stone.

Flue pipes and mixed walls: a) smoke ducts in the walls, b) mixed, c) Cyclopean wall.